MADISON, Wis. — A photo featuring Gov. Scott Walker and an accused Russian spy meeting at a National Rifle Association (NRA) event has been the subject of intense scrutiny in recent days. According to One Wisconsin Now Executive Director Scot Ross there’s more to the picture, namely Walker’s 25 year relationship with the NRA that has netted $3.5 million for his campaign coffers.

“The NRA got in on the ground floor with Scott Walker, doling out a check to him a quarter century ago,” said Ross. “The $3.5 million that they’ve doled out to support Scott Walker since then paved the way not only for him to spend 25 years in public office but also for an accused Russian spy to gain personal access to him.”

Campaign finance reports obtained by One Wisconsin Now show the NRA Political Victory Fund sent a $250 check to the Friends of Scott Walker on June 2, 1993, Walker’s first successful campaign for state office. Since those early days Walker has benefitted from $3.5 million in NRA donations to his campaign and spending by the gun group to further his electoral ambitions. 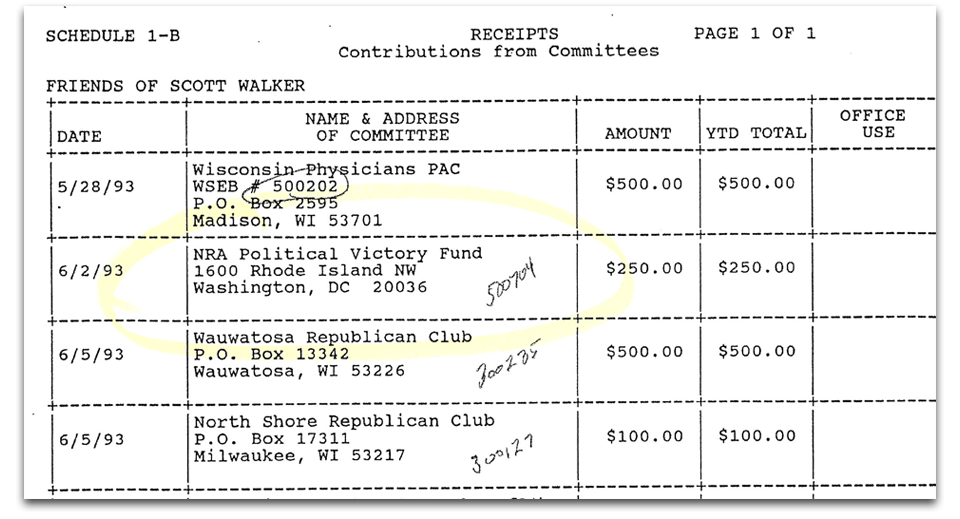 According to news reports, the accused Russian spy, Maria Butina, used her NRA connections to get access to U.S. politicians, including Walker. Widely circulated photos show Butina pictured meeting with Walker at an NRA event and attending the invite only kick-off of his presidential campaign in July 2015.

“Russian agents allegedly seeking to influence our elections saw the way to Scott Walker, who at the time was a contender for the GOP presidential nomination, ran through the NRA. And that casts serious doubt in the integrity of both the gun lobby and our Governor.”