MADISON, Wis. — The communities with the largest numbers of voters targeted in a right-wing instigated voter roll purge also delivered big vote margins for Democrats in 2016, according to data from the Wisconsin Elections Commission. A lawsuit seeking to force the pre-election voter roll purge was brought by a right-wing legal advocacy group on behalf of Republican campaign donors and at the urging of a Republican Party of Wisconsin leader. The legal effort also comes amid controversy stirred by the comments of a top campaign aide to Donald Trump revealing they will pour unprecedented resources into voter suppression to try to win in Wisconsin.

“A top Trump campaign aide flat out said suppressing votes has been a Republicans strategy to win,” commented One Wisconsin Now Deputy Director Mike Browne. “This right-wing voter roll purge that targets communities that supported Democrats sure looks like it’s part of the ‘playing offense’ strategy a top Trump campaign aide vowed they would pursue.”

Comparing data from the Elections Commission reveals that Donald Trump lost the ten largest communities in terms of the numbers of voters subject to the purge by over 270,000 votes in 2016: 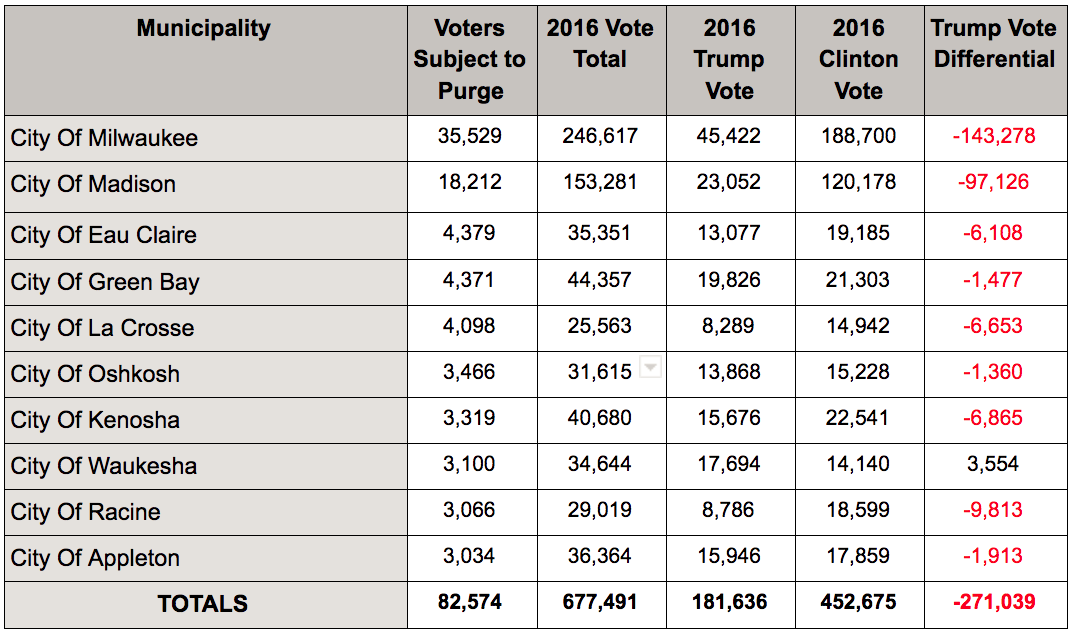 The voter roll purge could also come in time to impact the election bid of right wing state Supreme Court candidate Dan Kelly. In fact, the right-wing Wisconsin Institute for Law and Liberty that brought the suit is arguing the state Supreme Court on which Kelly currently sits should take up their case immediately.