MADISON, Wis. — In the aftermath of the Florida school shooting in which 17 students and staff were killed, Rep. Jeremy Thiesfeldt took to social media to share an article from a right-wing website romanticizing the presence of guns in schools years ago. One Wisconsin Now Executive Director Scot Ross expressed shock and outrage that Thiesfeldt, chair of the Assembly Education Committee, principal at a private school in Fond du Lac and father of four, would use his official capacity to publicly share such propaganda at such a time.

“That anyone, much less someone in Rep. Thiesfeldt’s positions, would think for a second that it was an acceptable time to share this kind of right wing, deadly weapon romanticizing propaganda is outrageous,” said Ross. “This incident seriously calls into question Rep. Thiesfeldt’s judgement and his competence to continue to serve in positions in which he has influence and authority over school safety and education policy.”

The article shared by Thiesfeldt, entitled “Flashback 30 Years: Guns Were in Schools … and Nothing Happened” was posted on the right wing website PJ Media. Among the contentions of the propaganda piece are that “mainstreaming nihilism” and “moral decay” explain what happened at a Florida high school this week, and dozens of other mass shootings in schools in recent years.

The author says that, “Just 30 years ago, high school kids rode the bus with rifles and shot their guns at high school rifle ranges.” but contends there were no incidents of violence because, “There was a time in America, before the Snowflakes, when any adult on the block could reprimand a neighborhood kid who was out of line without fear.”

Ross concluded, “There is no excusing or explaining this away. Thiesfeldt is an elected official, the chair of the Assembly Education Committee and the principal of a school where parents send their children.”

Thiesfeldt subsequently deleted the tweet in question, after One Wisconsin Now drew attention to it. 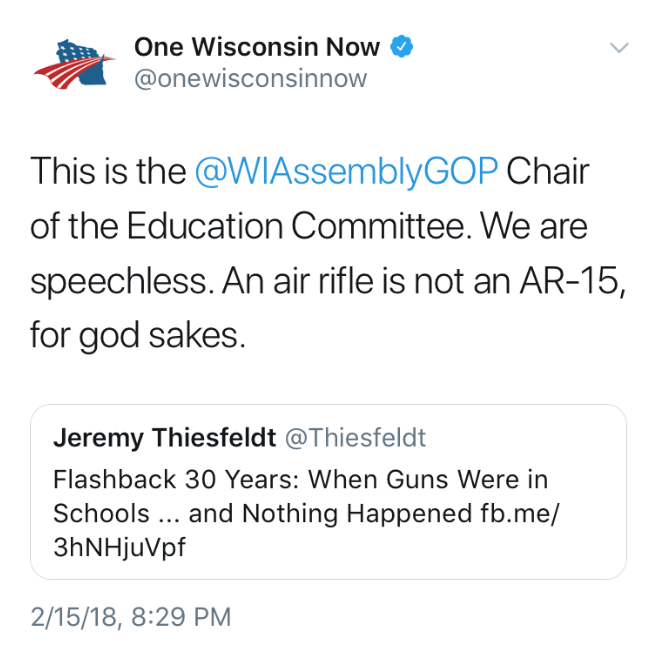