MADISON, Wis. — How desperate is Gov. Scott Walker for a political junket to Florida this December? Shockingly, so it seems, based on his scheduled appearance at a conference featuring some of the most extreme and divisive figures in American politics today.

According to promotional materials, Walker will be appearing at conference alongside the likes of Sebastian Gorka, a former Donald Trump aide with ties to Nazi-allied groups, Dinesh D’Souza, a convicted felon who vocally supports pedophile U.S. Senate candidate Roy Moore, noted white nationalist Steve Bannon, and a cavalcade of other right-wing purveyors of sexism, racism, homophobia and xenophobia. 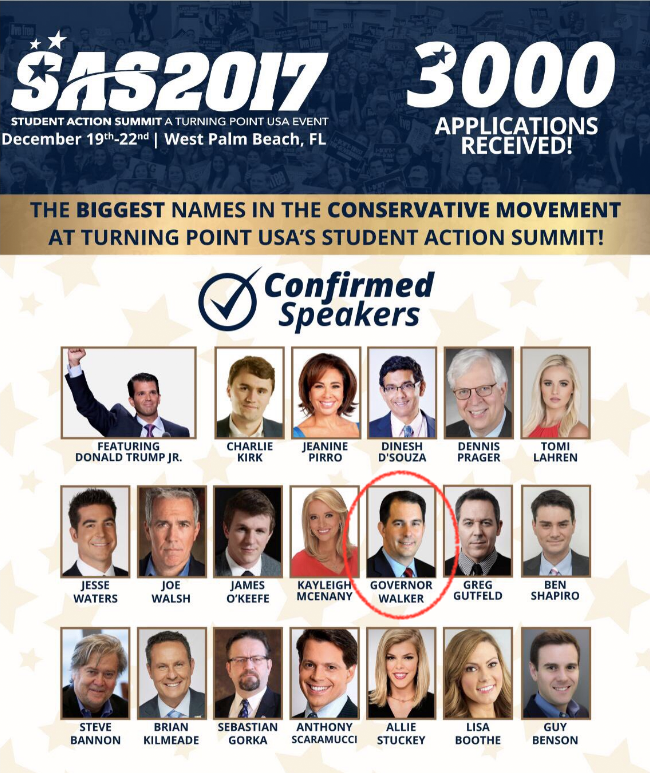 “No doubt many Wisconsinites would enjoy a December getaway to Florida,” commented One Wisconsin Now Executive Director Scot Ross. “But unlike Scott Walker most Wisconsinites wouldn’t be willing to share a stage with the likes of white nationalists, extremists with ties to Nazi groups and supporters of pedophile Republican U.S. Senate candidate Roy Moore.”

According to the announced lineup, Walker is the only elected official announced as attending. There is no indication yet if Walker will be using state tax dollars for his travels or if his campaign or private funders will be paying his way for the three day mid-December event in West Palm Beach, Florida.

Ross concluded, “With a lineup like this, will Scott Walker be delivering his remarks under the glare of the spotlight or the glow of a tiki torch?”