A copy of the Kasich fundraising appeal sent to Walker’s list, bashing the candidate he endorsed can be seen below: 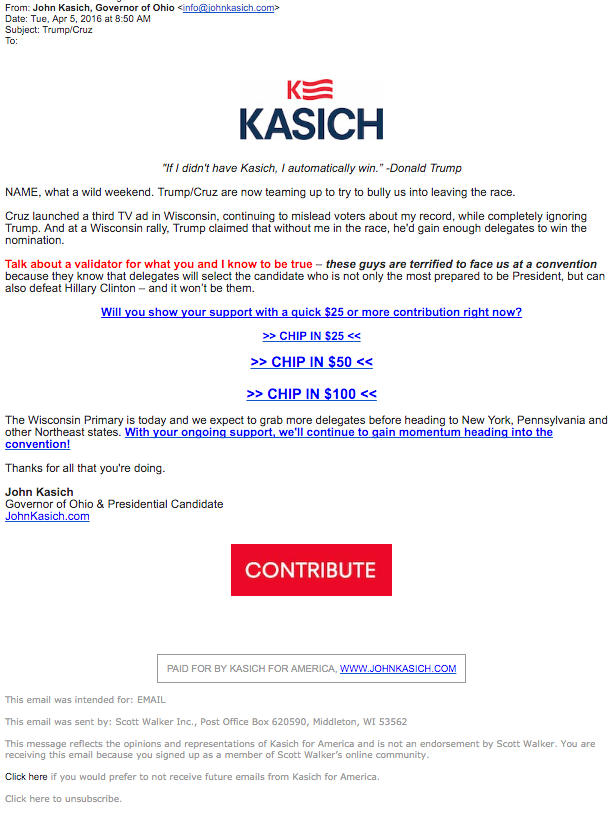 Walker’s presidential candidate pick, Ted Cruz, is the only candidate still in the race who actively solicited money to help retire the huge debt the Walker campaign rang up before it flamed out in just over two months. Fellow contender Donald Trump pitched in a then maximum allowable by law contribution of $10,000 to Walker’s 2014 gubernatorial election bid.

“Proving, once again, that there isn’t a more transactional politician in America than Wisconsin’s current governor. Scott Walker has managed to be on all sides of a three-candidate race for the Republican presidential nomination.

“He’s pulled his punches while the GOP establishment attacks their party’s presidential frontrunner Donald Trump. After getting help from Ted Cruz in retiring his campaign’s massive debt he makes an endorsement. And now, as the GOP circus leaves the state, he lends his fundraising list to Cruz and Trump’s rival John Kasich.

“This is Gov. Scott Walker’s guiding principle in action: what’s best for me and my political ambitions.

“The only question left is how much longer will Walker hold out before also endorsing Paul Ryan?”