MADISON, Wis. — In a recent interview with Mike Gousha on the UpFront television program, State Senator Leah Vukmir claimed her introduction of legislation in 2015 to eliminate the Government Accountability Board (GAB) “put her in the sights” and triggered investigators obtaining her emails that actually happened, according to recently-released information, in some period before the year 2013. Vukmir claimed that until December 2017 she was unaware prosecutors investigated allegations of illegal campaigning by Republicans in the legislature in the 2010 and 2012 recall elections. 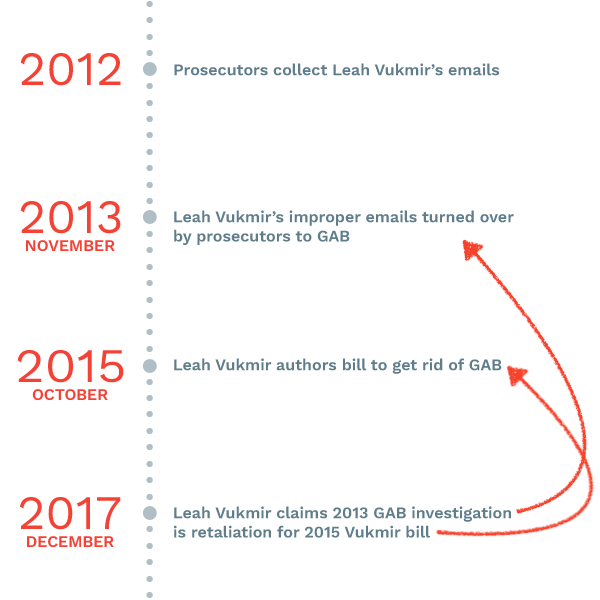 “Unless the GAB had a secret time machine, it is impossible for Vukmir to claim they targeted her with an investigation in 2012 for something she did in late 2015,” commented One Wisconsin Now Executive Director Scot Ross. “Leah Vukmir might to rethink the victim status she’s assigned herself in light of the realities of the time-space continuum.”

In the interview with Gousha, Vukmir was unequivocal in why she introduced legislation in October 2015 to eliminate the nonpartisan GAB and her belief in the consequences of her actions. Vukmir said, “I felt compelled to stand up and say, ‘we need to reform the GAB’ and because of my doing that, it put me in the sights of the GAB and I’m certain that this was politically motivated.”

According to a December 2017 report from Republican Attorney General Brad Schimel, prosecutors came to suspect Republican legislators and staff of illegal campaigning stemming from their inquiries into what they termed a “criminal scheme” involving Gov. Scott Walker’s gubernatorial campaign and other misconduct by his top aides and close associates. Their investigation into the legislative allegations, covering the 2010 and 2012 elections, included obtaining evidence, including emails from numerous individuals through 2012, that was subsequently turned over to the GAB in 2013.

Ross noted that more recently Vukmir’s tactics using her state office in pursuit of her latest electoral ambition may have run afoul of state ethics requirements. According to a complaint filed by One Wisconsin Now with the Wisconsin Ethics Commission, Vukmir’s sleazy deal naming the chair of the Board of the Wisconsin Economic Development Corporation (WEDC) to her U.S. Senate campaign finance committee could violate ethics prohibitions on elected officials using their position and action, or inaction, on legislative matters in exchange for “anything of value.”