MADISON, Wis. — One Wisconsin Now Executive Director Scot Ross today called on Justice Rebecca Bradley to recuse herself from the case of bullying Professor John McAdams suing to get his job back at Marquette University. Ross said Bradley is conflicted because the case is being brought and argued by an attorney who was instrumental in getting her appointed to the bench and supported her run for the high court.

“We’re not calling on Rebecca Bradley to bow out of this case because of the virulent homophobia she put on display in her writings when she was at McAdams’s employer, Marquette University,” said Ross. “She ought not sit on this case because it is being argued by an attorney who was instrumental in her appointment to the bench and her campaign for her current position.”

According to records uncovered by One Wisconsin Now, Prof. Rick Esenberg, who also runs the right-wing Wisconsin Institute for Law and Liberty, personally pleaded with Gov. Scott Walker to appoint Bradley to the bench in 2012 and was listed as reference on her state Supreme Court appointment. He also served as key supporter on her campaigns. 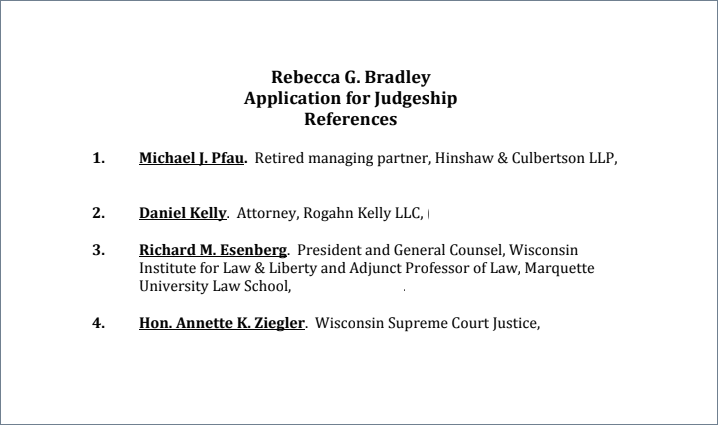 Esenberg is now arguing a lawsuit on behalf of Professor John McAdams to get his job back after being suspended indefinitely by Marquette University. McAdams bullied a graduate student with whom he disagreed, and the case is scheduled to be heard by the Wisconsin Supreme Court on which Bradley sits tomorrow.

While at Marquette University, Bradley authored numerous incendiary articles displaying reprehensible homophobia and other shocking views including women playing a role in their being sexually assaulted.

Despite her appalling views, Bradley was supported by Esenberg and twice appointed to judicial slots including the state Supreme Court by Gov. Walker.