“Robin Vos isn’t showing any love for Wisconsin public schools,” said Eicher. “According to a fellow Republican his plan to save a tax loophole that unfairly benefits the wealthiest in Wisconsin, and maybe even himself, could lead to cuts to public schools.”

According to comments from Republican State Senator Luther Olsen reported on Twitter, the Vos plan ends up “taking money off the table” for public school funding: 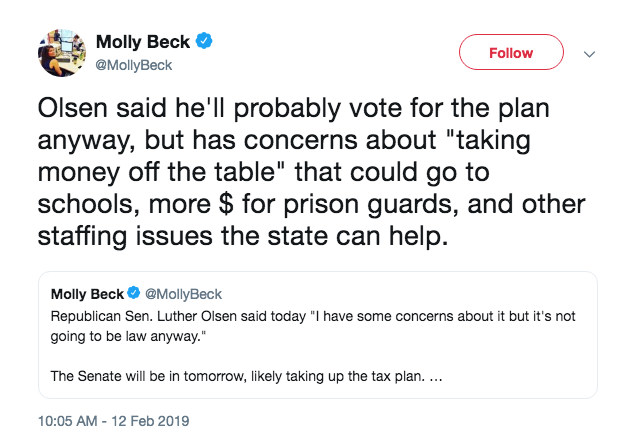 As reported earlier by the Milwaukee Journal Sentinel, Vos continues to rule out closing tax loopholes to pay for middle class tax relief, as Gov. Evers has proposed. Instead, “He said he would consider funding the cut through general purpose revenue.”

One Wisconsin Now previously raised the possibility Vos’ staunch defense of the tax break is personal. Vos’ financial disclosures reveal his personal wealth includes businesses with millions in real estate holdings and manufacturing interests. Entities for which he claims ownership have reported $0 in net state tax liability in recent years, according to tax records obtained by One Wisconsin Now.

According to the nonpartisan Legislative Fiscal Bureau, nearly 80 percent of the tax break Vos is fighting tooth and nail to preserve will go to individuals with adjusted gross incomes of over $1 million for tax year 2019.