The phantom southside Milwaukee candidate for state assembly, Jose Guzma¡n, is at last revealing himself contending with his recruitment by the political operative, Tom Reynolds, the notorious former state senator known for his anti-Catholic views and often bizarre political behavior.

After weeks of silence, Guzma¡n is meeting criticism of his campaign by finally speaking to the press, and accusing one of his opponents, incumbent Democratic State Rep. Pedro Cola³n (Eighth Assembly District, Milwaukee), of being “anti-catholic” for his vote for the Compassionate Care for Rape Victims bill, signed into law by Gov. Doyle in March.

Guzma¡n criticized Cola³n for his vote, saying Cola³n voted for “anti-Catholic legislation … against the people of the 8th Assembly District.” [See Guzma¡n literature below.] 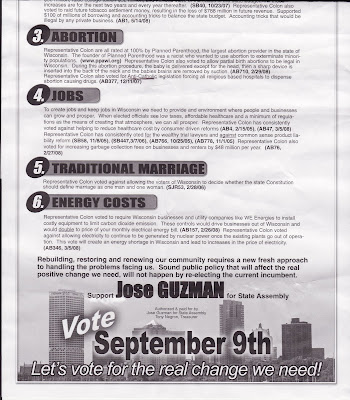 Reynolds is the founder and administrator of his political organization, Clean Sweep Wisconsin, that has been disavowed by both the Democratic and Republican Party establishment.

Guzma¡n has until recently avoided press queries and a questionnaire from the League of Women Voters of Wisconsin as he attempted to avoid mention of his association with the radical Reynolds whom he met at church.

Guzma¡n is now dropping 100s of pieces of literature in an attempt to appeal to voters in this low-turn out district.

The Eighth Assembly District on Milwaukee’s south side is the most Catholic district in the state.

Guzma¡n is running against incumbent Democratic State Rep. Pedro Cola³n and Laura Manriquez, who tried to have both Cola³n and Guzma¡n knocked off the ballot in a challenge that was unanimously rejected and panned by the Wisconsin General Accountability Board earlier this summer.

The Compassionate Care for Rape Victims act was a major victory for women and rape victims, as Planned Parenthood Advocates of Wisconsin writes:

Victims of rape or incest deserve immediate access to safe, efficient methods of pregnancy prevention. Compassionate Care for Rape Victims ensures that this occurs by requiring all Wisconsin emergency rooms to provide rape victims with information about and access to emergency contraception.

Guzma¡n says in his literature that “the founder of Planned Parenthood was a racist who wanted to use abortion to exterminate minority populations’.