MADISON, Wis. — Battling his lack of credibility on protecting health care coverage for people with pre-existing conditions, Gov. Scott Walker has released a new television ad. One Wisconsin Now Executive Director Scot Ross said Walker is not to be trusted, not just because he is supporting a lawsuit to eliminate current law protections from insurance companies, but because he hasn’t cared about the issue until it threatened his being able to continue his quarter century long run as a professional politician, enjoying taxpayer funded healthcare for himself and his family. He noted Walker also blatantly misled voters in a 2014 campaign ad.

Ross pointed to Walker’s official and campaign Twitter accounts as evidence of his total lack of interest in the issue of pre-existing conditions, until it became a liability for him politically. While often found tweeting about what he was eating, Walker did not, based on a word search of his tweets, mention pre-existing conditions a single time until 2017. In that year he mentioned the issue on one occasion.

Now in the midst of an election year, Walker has made mention of the issue numerous times as he attempts to explain away his continuing support for efforts, made at his direction, to eliminate pre-existing condition protections. 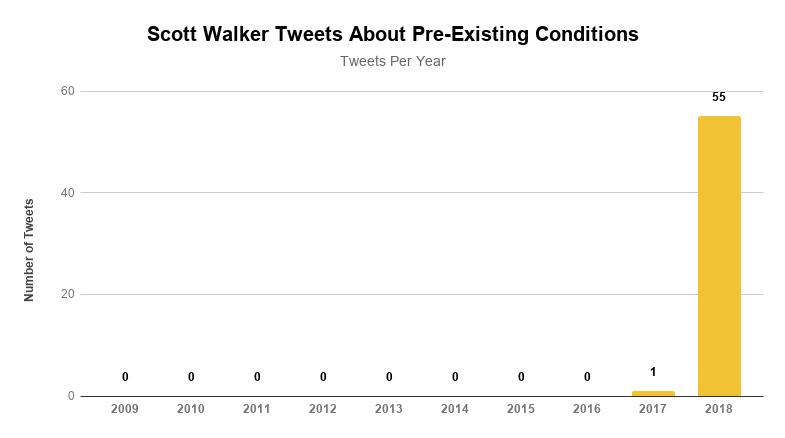 Walker’s latest ad is eerily similar to 2014 gambit on women’s health care. In that television ad, much like the one released by his campaign today, Walker looked straight into the camera and said he trusted women to make their own health care decisions. By summer of 2015, in the midst of his ill fated presidential campaign Walker had signed into law an extreme abortion ban that did not include, at his request, exceptions for rape or incest.

Ross concluded, “Scott Walker is not to be trusted. He will do or say anything to try to win an election, he looked into the camera and lied to get elected in 2014 and he’s doing it again today.”