MADISON, Wis. — Among the most egregious examples of Gov. Scott Walker’s “serial misuse and abuse” of the taxpayer-funded state plane are the ridiculously short flights he took at times, charging taxpayers to fly he and his entourage distances as short as 24 miles from Appleton to Green Bay.

After his disastrous run for president, Gov. Scott Walker admitted in an interview that he needed to rehabilitate his political image in Wisconsin to have a chance at continuing his 25-year political career. One Wisconsin Now’s investigation of state records reveals Walker’s use and abuse of taxpayer resources, deploying the state airplane for over 950 flights from September 21, 2015 through August 2018 at a cost in excess of $900,000, as he mounted his over two year long campaign to try to repair and rehabilitate his political image.

An sample of the outrageously short flights Walker charged taxpayers for as part of his three-year political rehabilitation campaign:

“In 2010, Scott Walker campaigned for governor by bragging about how he drove an old Saturn wagon and packed his own ham sandwiches for lunch,” said Beilman-Dulin. “Eight years later, career politician Scott Walker has chucked his brown bag and is flying the state plane distances that you take your kids on when you go for a weekend bike ride.”

When One Wisconsin Now released its research on August 20, including the “Scott Walker Air In-flight Magazine,” Walker took to Facebook with a 200+ word rant against the organization. Walker could not refute a single piece of One Wisconsin Now’s research about his abuse of the plane, including: 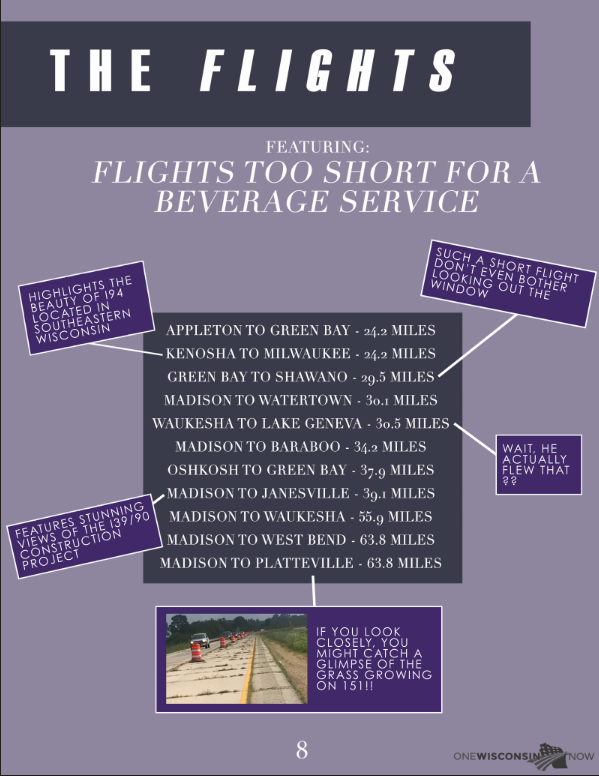