It’s that time, again. Scott Walker, who’s been running for political office for nearly his entire adult life, since 1992, is running for office again.

So we thought it was a good time to refresh our list of ten things to know about Scott Walker. Enjoy our 2107 edition, and if you want a trip down memory lane, here’s our list from 2015 when Scott Walker launched his epic 71-day run for President:

Is the worst governor in the nation on student loan debt. According to the latest research, Wisconsinites owe at least $24.4 billion in student loan debt. Under Gov. Walker we have the dubious distinction of consistently ranking among the top ten states in the nation for the percentage of graduates with student loan debt. And yet Scott Walker has for three consecutive legislative sessions opposed state legislation helping borrowers refinance their loans, just like you can with a mortgage … a plan supported by nearly 80 percent of registered voters in a recent poll.

Means what he says, except when he doesn’t. Career politician Scott Walker will say whatever he needs to in order to try to win an election. In 2010 he promised to create 250,000 jobs by 2014, a promise that remains unfulfilled in 2017.

In 2015 he said he ended his run for president in order to unite the party against Donald Trump, but by 2017, well, this … 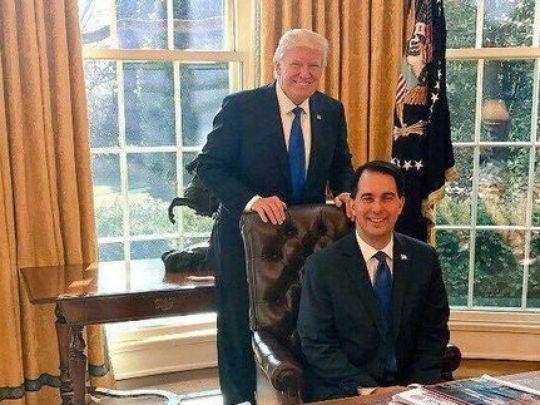 Has his own fake news operation. The Gov. Scott Walker-led Republican Governors Association (RGA) has launched a propaganda website masquerading as a legitimate news outlet to spread negative attacks on Democrats and promote Republicans. The website was promoted in an RGA fundraising appeal obtained by One Wisconsin Now as, “fact-checking the liberal media,” but includes a mix of stories from legitimate media sources in addition to right wing news outlets and the RGA’s own press releases.

Took money from marijuana trade industry, wants to drug test poor people. Walker, as head of the Republican Governor’s Association, accepted a major contribution from a marijuana industry trade group this year at the same time he was lobbying for authority to require drug testing as a condition of receiving public assistance benefits, reaching new heights of political hypocrisy.

Wants to hear from you at a town hall meeting, if you’re invited by a lobbyist. Gov. Scott Walker claims that he hears “good things” at his taxpayer-financed, closed to the media and the public listening sessions. Based on information obtained by One Wisconsin Now about how his audience is hand picked from lists provided by lobbyists, fellow Republican politicians and his state agencies with regulatory power over businesses it’s obvious how a governor with low approval ratings is hearing what he wants to hear.

Ran for president. On July 13, 2015, less than 18 months into a four year gubernatorial term he had, before the 2014 election, indicated he intended to serve out, Scott Walker officially became a candidate for President. Instead of doing his job as governor, his epic journey lasted for 71 days, during which time he embarrassed himself on the national stage and racked up millions in campaign debt before exiting the race polling support of 0.0 percent among the Republican primary field.

Thinks homophobic and racist pronouncements are qualifications for the Wisconsin State Supreme Court. Scott Walker has made two appointments to our state’s highest court. One of whom issued numerous vile screeds attacking the LGBTQ community, equating birth control with murder and suggesting women are culpable for their own date rape. The other one compared affirmative action with slavery.

Is good at keeping secrets … he still has not revealed the identities of donors to his criminal legal defense fund. In March of 2012 it was discovered that Scott Walker created a legal defense fund to pay criminal defense lawyers working to protect him in an investigation of his campaign activities alleged to have been in violation of Wisconsin law. Five years and seven months later we still do not know the identities of the individual or individuals that donated over $400,000 to mount his legal defense.

Wanted to build a wall too … on the border with Canada. In the dying days of his presidential campaign, with his pander power in overdrive trying to keep up with the Trumps, Scott Walker endorsed building a wall of his own, with our neighbor to the North, Canada. That’s right, Canada Wall. 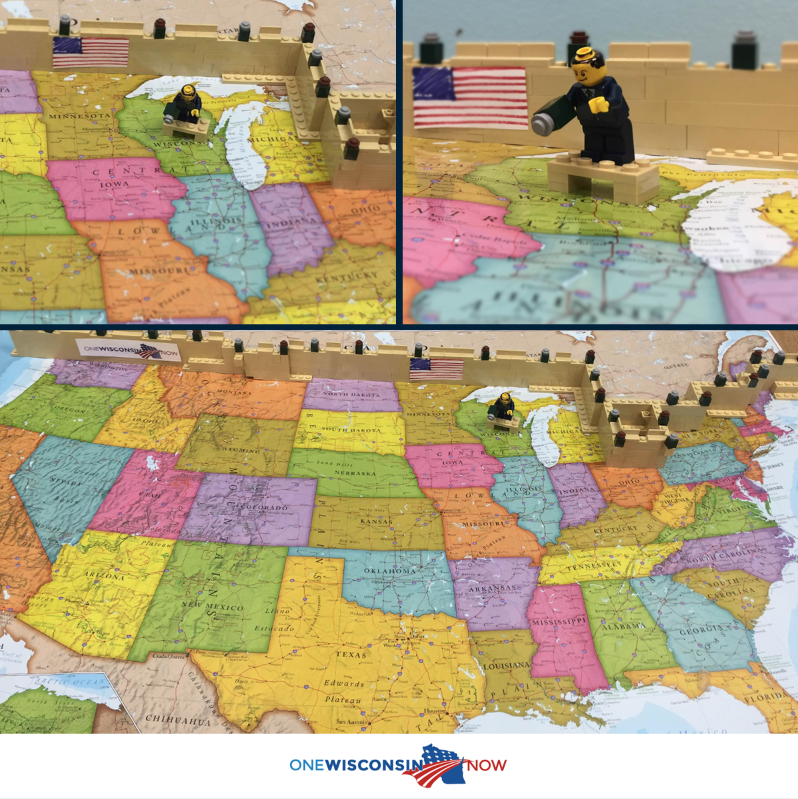