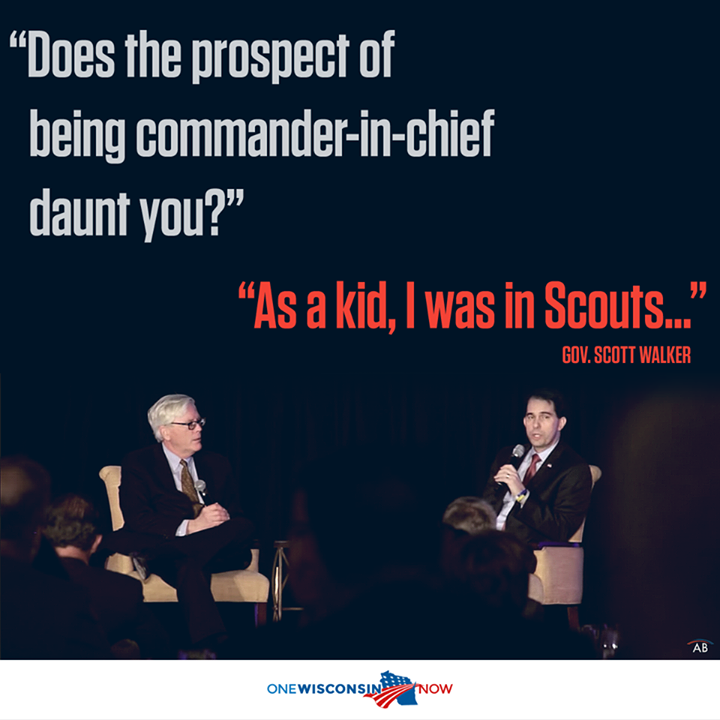 The Boy Scout motto is “be prepared.” But Gov. Scott Walker, who achieved the rank of Eagle Scout as a teen, has taken that motto to new heights, claiming that as an Eagle Scout he’s prepared to be commander-in-chief of the United States military.

Gov. Walker, unprompted by a question, sought to blame his male pattern baldness on an incident in which he says he hit his head on a kitchen cabinet…for real. Hitting his head might explain some things about Gov. Walker, but not his hairline.

The bald spot, he said, was the result of a repair incident in the kitchen when he banged his head on an open kitchen cabinet door while making repairs requested by his wife, Tonette. 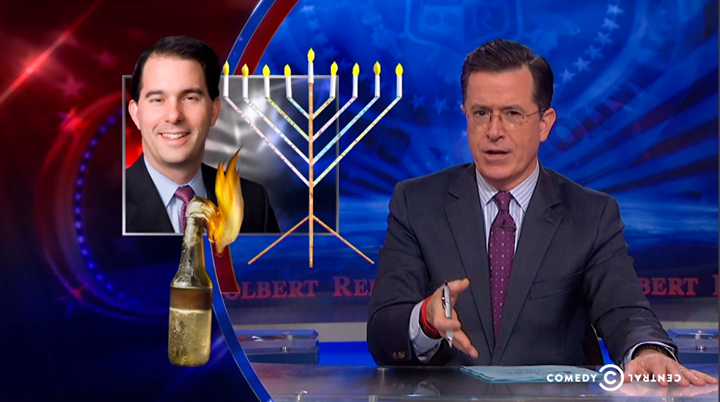 The court ordered release of thousands of emails from Gov. Walker and his staff seized as part of a criminal investigation of his administration in Milwaukee County provided a treasure trove of documentation of how politics incarnate Scott Walker does business. Among the more “explosive” revelations was the time Gov. Walker’s attempt to pander to a Jewish constituent blew up in his face.

In that letter he attempted to use the phrase “mazel tov,” and failed miserably. Instead Scott Walker wrote “Molotov,” like a “Molotov” cocktail. 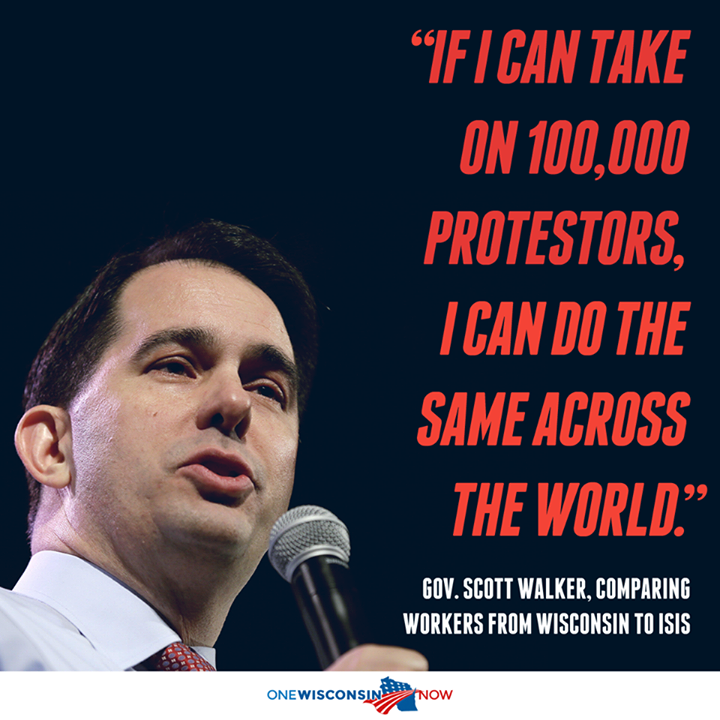 Scott Walker’s bona fides on foreign policy have been questioned by friends and foes. When you attempt to prove your readiness to take on challenges on the international stage by equating teachers with terrorists and other public employees with despots you deserve scrutiny.

Reactions have been largely negative to the governor’s suggestion that combating union protesters in Wisconsin, many of whom were school teachers, has prepared him for the threat posed by the Islamic State.

Gov. Scott Walker may have dropped out of college but the real contempt he has for education shows up in his budgets. He not only enacted the largest cuts to public education in Wisconsin history but cut per student school funding by more than any other governor in America.

6. Scott Walker authorized an Obamacare lawsuit on his first day in office

As “6 in 10 people say they’re more worried about…paying for healthcare” sign and stand up against #ObamaCare: http://t.co/QcYun6JAop -TW

And, Scott Walker didn’t stop at authorizing the use of state tax dollars to sue to stop health insurance reform on his first day in office. He also refused to accept hundreds of millions of federal funds to expand health care coverage in Wisconsin and help balance the budget.

7. Scott Walker’s campaign has been under investigation his entire tenure as Wisconsin governor 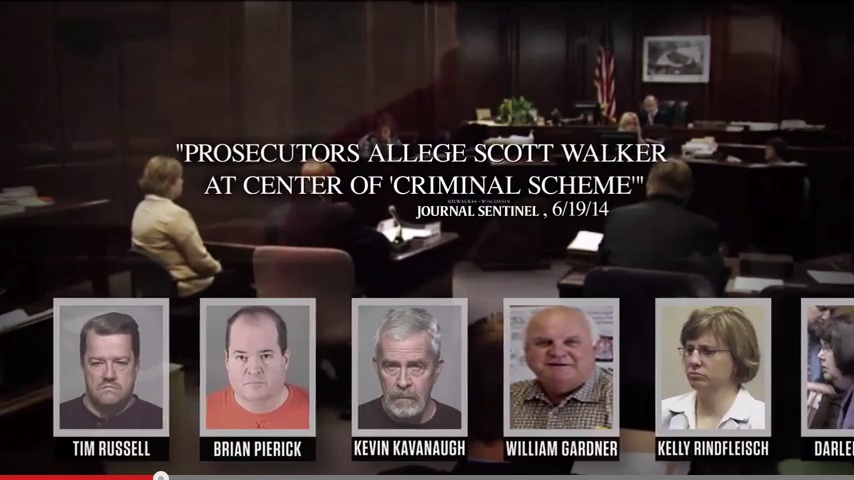 Gov. Scott Walker has been under investigation for virtually every day he’s been in office — the result of two secret John Doe investigations.

8. Scott Walker is the worst Governor in America for women

Walker’s dismal record on policies that affect women goes beyond abortion. From the time the Republican governor was first elected in 2010, the aspiring 2016 candidate has championed ideas that have dire consequences for the state’s female residents, young and old alike.

9. Scott Walker does not make mistakes 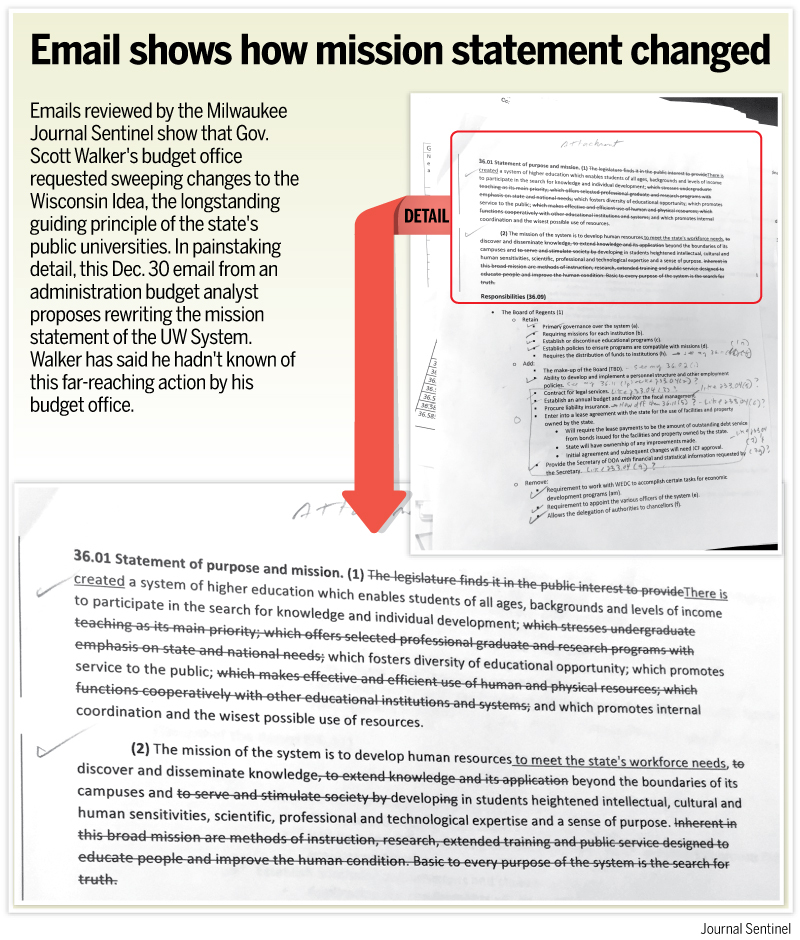 Mistake? When it comes to Scott Walker, it couldn’t possibly be a mistake. It was simply a “drafting error.” You know, like a typo that results in you accidentally striking sentences of the state’s beloved Wisconsin Idea.

“[Walker’s] office attempted the ridiculous excuse that the pernicious editing of the university’s mission was simply ‘a drafting error‘ in the budget text and that the Wisconsin Idea would be left intact after all. But a December email showed clear instructions from the administration to make the deletions.”

10. Scott Walker is unintimidated by budget deficits, even the ones he caused

A 2014 Walker campaign ad showed the “unintimidated” governor standing in a hole in the ground, claiming to have helped Wisconsin climb out of a budget deficit. The truth? After four year’s of Walker’s leadership, Wisconsin faced a $2.2 billion deficit for the 2015-17 budget cycle.