Oh, for the love of god, we again have to endure another version of the yearly Tommy! Thompson’s (not) going to run for some political office? 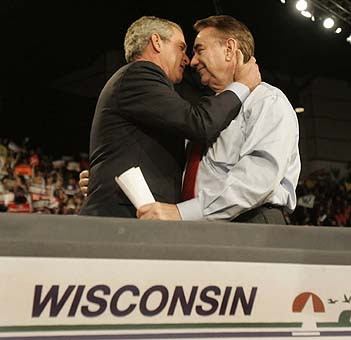 When one asks how many times the former “governor of the great state of Wiscons” will pull this tired canard out, the number is, to quote fellow Bush administration alum Donald Rumsfeld, “unknown unknowns.”

To recap: Tommy!s army of regulars in the lobbying corps are floating his name as “seriously” considering a bid for the seat of Sen. Herb Kohl, who announced he would not seek re-election.

Been there. Done that.

Lest you have forgotten how many times we’ve been down this tired road in the last decade-plus:

‘¢ 2000: “Republican Gov. Tommy Thompson said Saturday that he may consider running for a fifth term if he sees evidence that Democratic Attorney General Jim Doyle stands a good chance of being elected governor in 2002.” [Green Bay Press-Gazette, 6/11/00]

‘¢ 2001-02: Thompson began in 2001 as Health and Human Services Secretary and made no noise about running again, spending time growing his rolodex to do lucrative private sector work, preparing to deceive Americans about the true cost of the coming unfunded $8 trillion Medicare Part D disaster and snapping a motivational locker room towel at our chubby children.

‘¢ 2003: “Former Gov. Tommy Thompson gave delegates at the state Republican Party convention what they craved: criticism of sitting Gov. Jim Doyle and a promise he’ll return home to Wisconsin one day to run for public office. (But Thompson said Saturday that chances were ‘slim to none’ he would challenge Democratic U.S. Sen. Russ Feingold in next year’s election.)” [Associated Press, 5/11/03]

‘¢ 2006: “Former Gov. Tommy Thompson says he believes if he were to seek the Republican nomination for governor, he would be certain to win in November over incumbent Democratic Gov. Jim Doyle. ‘If I run, I win,’ Thompson said Thursday in an interview with the Milwaukee Journal Sentinel, reported from its Washington, D.C., office. ‘I have no doubt in my mind about that. But then I have to govern.’” [Associated Press, 5/12/06]

‘¢ 2007: Thompson was in the midst of his brief presidential run and at the time was making news for saying that employers should be able to fire gay people — an illegal act for an employer in Wisconsin, and for saying that raising money was “part of the Jewish tradition.” No potential run in Wisconsin was inferred.

‘¢ 2009: “Former Health and Human Services Secretary Tommy Thompson is considering a run for Wisconsin governor. Thompson told 12 News that he’s currently looking for other candidates to step up before he throws his hat in the ring.” [WISN-TV, 4/29/10]

Tommy! served for a long time in the Assembly. He served a long time as governor. He did the Bush administration gig and now he’s spent the last several years making tons of money working for the health insurance cartel.

Tommy! was a huge spender and no governor has increased state spending more. Tommy! hid the costs to help pass the largest unfunded mandate in American history with the $8 trillion Medicare Part D boondoggle.

The fact is: in the current GO-Tea Party Tommy! would not get through a Republican statewide primary against a candidate that has money to remind rabid primary voters about his big gubmint record.

And so now, 45 years after his first election to the State Assembly, that is why Tommy! Thompson will not run for the U.S. Senate.

(Ed note: If even this post seems familiar, we’ve run a version of it before. In 2009. The more things change, the more….well, you dig.)