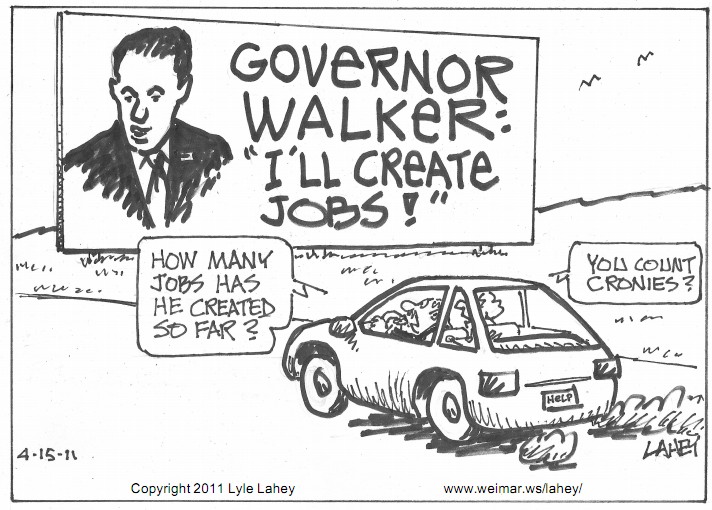 Most Wisconsinites remember when Governor Walker promised to create 250,000 jobs and 10,000 businesses during his term in office. Walker issued this promised shortly after being elected last fall and used it to justify his austere budget cutting measures last winter. Budget items that cut education, public health, environmental regulation, and stripped away over 50 years of union rights in the state were all a part of the apparent shared sacrifice of creating jobs in Wisconsin. However, recent jobs numbers show that the governor has a very long road ahead of him if he is to keep this promise.

After a staggered July jobs report, the Department of Workforce Development reported that the state lost 12,500 private sector jobs in the same month, which is the most since the peak of the 2008-2009 recession. Since taking office Gov. Walker has added 28,700 jobs, showing growth is crawling at a very slow pace and it doesn’t appear that the fiscal effort that provoked massive protests at the state capital is working.

The failure to stimulate the Wisconsin economy and get its citizens back to work is underscored by the annual report “State of Working Wisconsin” issued by the Center on Wisconsin Strategy, the report showed that 7.8% of the state’s workforce is unemployed. The report goes even deeper by counting people who have given up on their job search and aren’t included in government reports, as well as those who are employed part-time but require a full-time income.

Through this broader scope it is clear that Wisconsin’s jobs crisis is in much more dire straits than the Governor is letting on, the report shows that theunemployment rate for workers aged 16-24 is at 16%, those without a high school degree are unemployed at a rate of 19% and an entire quarter of the state’s African-American workers are out of work.  Given this fuller picture of the situation, the Center on Wisconsin Strategy cites an unemployment rate of around 14%, meaning over a quarter million people either cannot find work or achieve the work hours they need.

With such deep unemployment in critical cohorts of the workforce it is clear that the state faces a long and arduous road to economic recovery. In such hard times one would expect Governor Walker to head back to the drawing board and attempt to alter his economic strategy to take on this bleak economic climate and get his fellow Wisconsinites back to work. Instead, our Governor’s priorities seem centered around himself as he is more concerned with holding a fundraiser to restore the governor’s mansion, an event that no doubt will benefit the Governor as the state’s wealthiest and most powerful people clamor to gain favor. Instead of building a strong workforce and fulfilling his promise of creating jobs Governor Walker is preoccupied with building his army of yes-men, intent on replacing democracy with crony politics and favoritism. Let’s face it, even as most of the state suffers, it’s Walker first and Wisconsin second.