The nation has found out, the dirty little secret that we in Wisconsin have known for some time. That Governor Scott Walker has a serious Koch problem. 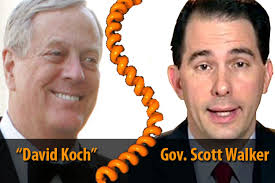 But that’s the way it with Koch. Gov. Walker thought, I can handle it. I can quit anytime I want to. Only I don’t want to.

Governor Walker took forty-three thousand dollars in Koch money. Worse, one million dollars of Koch-fueled mayhem went to the Republican Governors Association. The Republican Governors Association spent five million dollars to elect Scott Walker our Governor. And now the Koch’s personal front group, Americans for Petroleum…er, Prosperity, is running hundreds of thousands of dollars in ads on teevee trying to convince Wisconsin that Gov. Walker is right. But, we know – you and I and people across this state – Gov. Walker’s budget deal is wrong for workers, wrong for families, wrong for taxpayers and wrong for Wisconsin.

And I guess it’s no surprise, when Gov. Walker thought his main Koch dealer was on the phone the other day – he picked it up to get another fix. You heard the call. Talking about sending in goon squads disrupt our mission, and using the economic livelihoods of 5,000 working men and women and political chess pieces to “rachet things up.” Well, it’s Gov. Walker, so maybe it’s not something as intellectual as chess. How about checkers?

So, this is where we’re at Wisconsin. And here’s what we’re going to do about it.

When it comes to the Koch money or this Koch fueled undemocratic plan, we need to send a three word message.

In every corner of Wisconsin. In every city and every town and every village, Wisconsinites are standing up, speaking loud and saying three simple words: Just Say No.

When Governor Walker puts Wall Street ahead of Working Families, Just Say No.

When Gov. Walker attacks health care for one million Wisconsinites and jacks the price of prescription drug costs for seniors, Just Say No.

When Gov. Walker threatens the quality of our schools and our kids’ education by taking away the voice of teachers serving in the classrooms everyday when it comes to class sizes, curriculum and other school quality issues, Just Say No.

When Gov. Walker refuses to sit down with working men and women after they gave him the financial tools to solve our budget shortfall, Just Say No.

And when Gov. Walker’s tries to send in the government to seize the rights of working men and women across the magnificent state, my friends what are going to scream as loud and as long as necessary until he stops this attack on our way of life in Wisconsin, in a united voice, Just Say No.